This year’s American Music Awards (AMAs), Nov. 23rd 2014, served a few promising red carpet looks. I’m a little over the thigh-slit gowns now; the repetition just oozes lack of creativity on the design front so excuse me while I wait for the next over-hyped trend. Top of my best dressed list is Selena Gomez, slaying in a black back-less Armani Privé gown. Her simple slicked back hair and naturally dark makeup tones worked well not to take away from the simple look and added focus on the fabulousness that is this back design…

White looks so simple but is one of the hardest colours to pull off. Kate Beckinsale worked that dress. Period. And I will always salute a well-fitted suit, on anyone. Jessi J takes the best-suit-award if there was one that night – the only thing I actually liked about Gigi’s suit was the funky patterns.

Not my favourite look from Zendaya who usually comes to lecture us all on style when she makes her appearances. In any case it was different so it had to be on the list. Rita’s gown is lovely. Slightly over the top but I will always commend a woman’s ability to look great while leaving much to our imagination.

The Beauties in Black

Slick, slender and poised. You really can’t go wrong donning black on the red carpet, and the AMAs provided great inspiration for a black attire. Charli did Vivienne Westwood much justice in all her vintage pop-up splendour and this look would easily have been my favourite if it wasn’t for the extra order of cleavage. 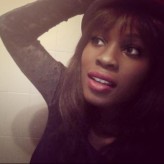